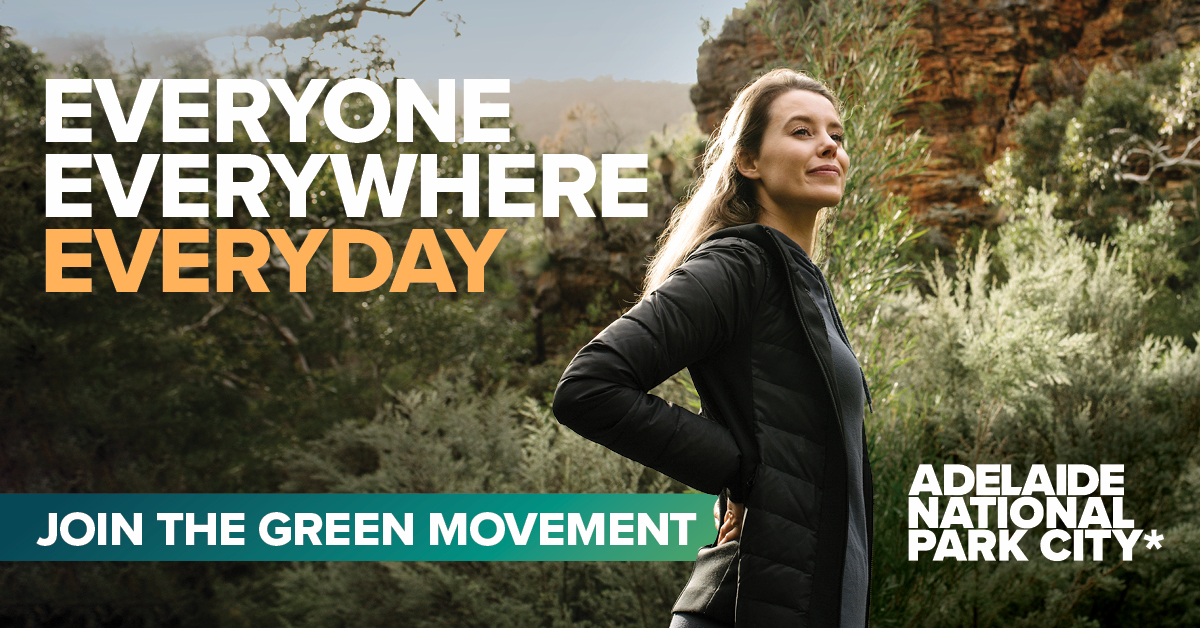 Adelaide has been named the world’s second National Park City, enhancing the city’s reputation as the most liveable in the country. Here's all you need to know about this new green movement.
Who?
Everyone, Everywhere, Everyday
Where?
Adelaide
More info?
Learn more

The UK-based global National Park City Foundation confirmed Adelaide’s National Park City status at the World Urban Parks Congress at 7pm on 10 December 2021, making Adelaide the first in Australia and second in the world to receive the honour.

“Adelaide National Park City status isn’t just another title for our city, it is a trigger to promote and connect people with on-ground action to look after our environment for everyone’s health and wellbeing, as well as boost our economy through increased tourism," Professor Daniels said.

“We know that 95% of Adelaide residents only need to travel around 400 metres to connect with an open, green area, and over the next few years, you’ll see some real on-ground action towards the Adelaide National Park City movement to create a cooler, greener and wilder city.

“This includes $5 million to green our CBD streets and places, $5 million to re-wild the River Torrens, and millions of dollars in grants to enable the community and councils to deliver climate resilient projects on-ground.

“Plus, the delivery of iconic rewilding projects like bringing platypus back to the Torrens, creating a more butterfly friendly city, and enhancing habitat and awareness about our city’s birds of prey.

“Adelaide’s push to become a National Park City was supported by the fact we already have 30 per cent green space, and diverse wildlife from 1,080 native plant species and 281 native species of birds, to 60 native fish species and 47 native mammal species, plus more than 58 species of reptiles."

Professor Daniels added that Green Adelaide has driven Adelaide’s National Park City application on behalf of all of Adelaide’s people and nature.

“Adelaide is now a global leader, and everyone in Adelaide can get involved in so many ways," Professor Daniels said.

“You can show your support by signing the Adelaide National Park City Charter, or by growing a little bit of nature in your backyard, front yard or with others in nearby open spaces. Also, you can share your wonderful experiences of nature through pictures, posts, songs and art.

“Everyone, everywhere and everyday can be celebrating our city’s diverse cultures and communities and our common connection with nature."

The Adelaide National Park City status follows National Geographic recently naming Adelaide as the sixth most sustainable destination in the world, thanks to the green movement, and the years of effort by volunteers, government and organisations to look after our nature, which boosted Adelaide's credentials in Green Adelaide's application.

"At a time of great health, climate and ecological anxiety, becoming a National Park City is an incredibly positive, hopeful and pragmatic step for a city to take," Mr de Zylva said.

Mr de Zylva added that now, more than ever before, we understand the importance of having a better relationship with nature; not only for nature itself, but for the wellbeing of ourselves, our loved ones, communities and cities.

"Becoming a National Park City is not just about a collective vision or the status of the city, it is a statement of intent and a way of organising to radically improve life for both people and wildlife, now and into the future," he said.

"Everyone, everywhere in Adelaide, will have the potential to both benefit from and contribute to their National Park City everyday.

"From respecting the sacred lands of indigenous communities to using plants to moderate the city centre climate, there are many great things happening, but by working, learning, sharing and acting together, so much more can be achieved and we are excited to support Adelaide National Park City’s journey.”

National Park Cities aim to be places where people and nature are better connected.

It is a movement for everyone to take action everywhere and every day to be better connected with the environment and each other.

Join the movement at: www.adelaidenationalparkcity.org. A public celebration to launch Adelaide National Park City will be held in autumn 2022.

Who will be the next National Park City?